Last October we wrote about the performance of AIM-listed renewable energy stocks (Greenbarrel, Oct 2020). The most striking feature was that most of these stocks had shown a sharp increase in price around the beginning of June. Now, six months later we look at how they have performed since then.

As before the stocks have been divided into four categories: Waste, Hydrogen, Storage and Funds. The AIM100 index is shown with the Funds for reference. To make it easier to compare, the prices are plotted as percentages of the increase since the beginning of the period (thus 300% means the stock has increased by 3 times its value at the beginning). The period is one year for all stocks.

Once again there have been some sharp increases in price, this time around the end of December 2020 and once again it is the Waste category that shows this most clearly.  EQTEC’s share price increased by a factor of four and Powerhouse Energy’s by about three, with both showing some decline since then. 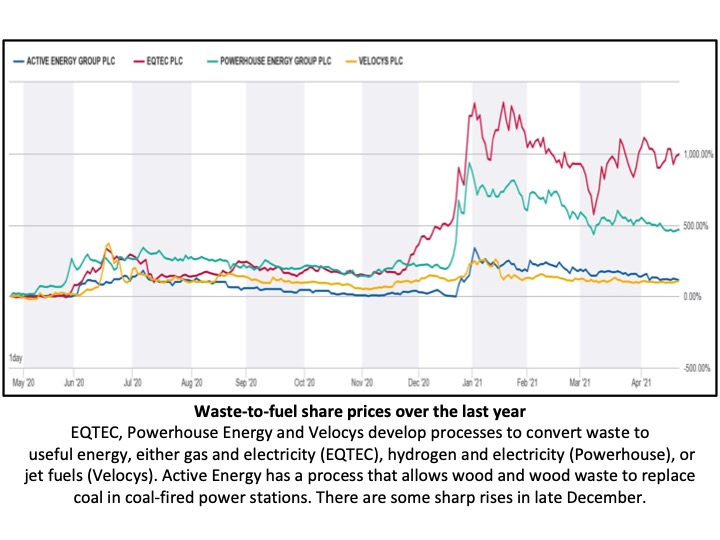 Of the other two Waste stocks, Active Energy shows a small jump, but Velocys hardly any. Both EQTEC and Powerhouse Energy started from very low values a year ago. However even in terms of market capitalisation EQTEC at £79m and PHE at £108m are currently higher than Velocys at £41m. All three use high temperature incinerators to process the waste, but Velocys focuses on turning the resultant gases into liquid using a sophisticated process of which the market seems suspicious. Active Energy’s market capitalisation is £11m. 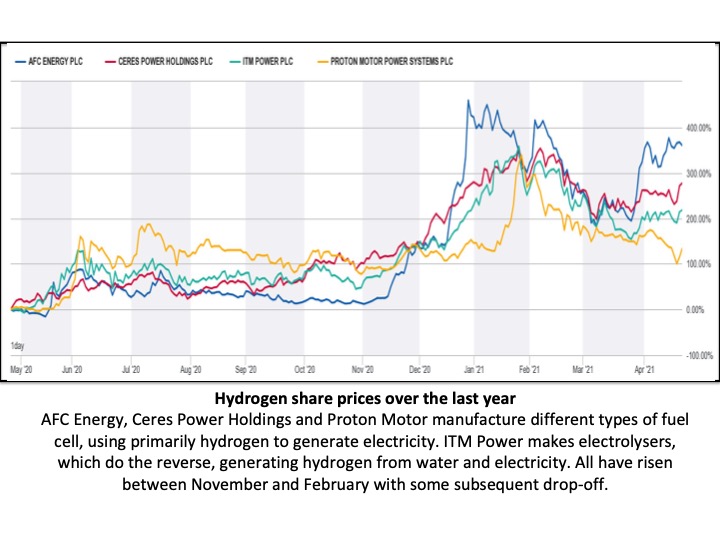 Hydrogen stocks also rose significantly at the end of the year, with ITM Power leading the way, as might be expected for a leading manufacturer of electrolysers (the worldwide leader according to the company).  Ceres has always been popular with the market and, although still loss-making does produce a significant revenue. ITM and Ceres have market capitalisations of £2300m and £2000m, far above all other AIM-listed renewable stocks, while AFC Energy and Proton Motor Power are at £313m and £445m. 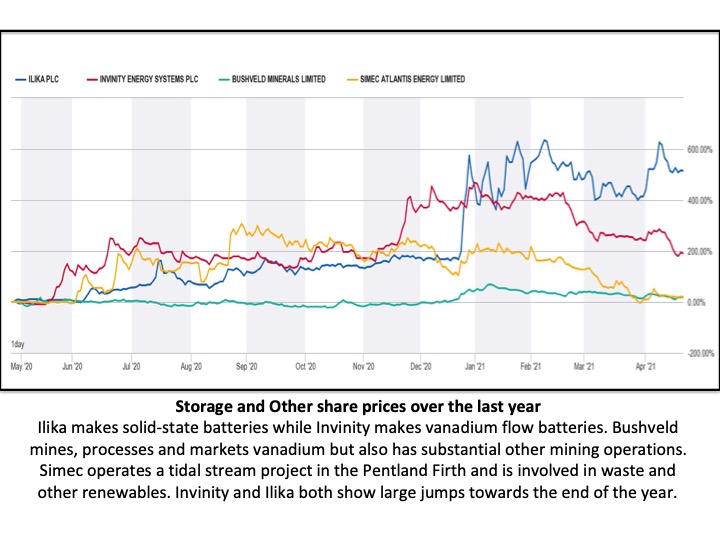 Two battery makers (Illika and Invinity) showed sharp rises towards the end of the year, but Invinity has fallen back since then. A third battery maker, AMTE Power, listed in March but it is too early to see any trend. Bushveld shows little change overall but its results are heavily influenced by its non-renewable mining operations. Market Capitalisations are Ilika at £107m, Bushveld at £189m and Simec at £36m (Invinity is not available).

Leaving aside Bushveld it is worth noting that none of the stocks in the three categories above have yet reported a profit. Indeed some have not yet reported any revenue. Ceres has the largest reported annual revenue at £15m, but the highest of the remainder is Simec at £5m. Thus investment in these shares is mainly a bet on the future of their technologies. 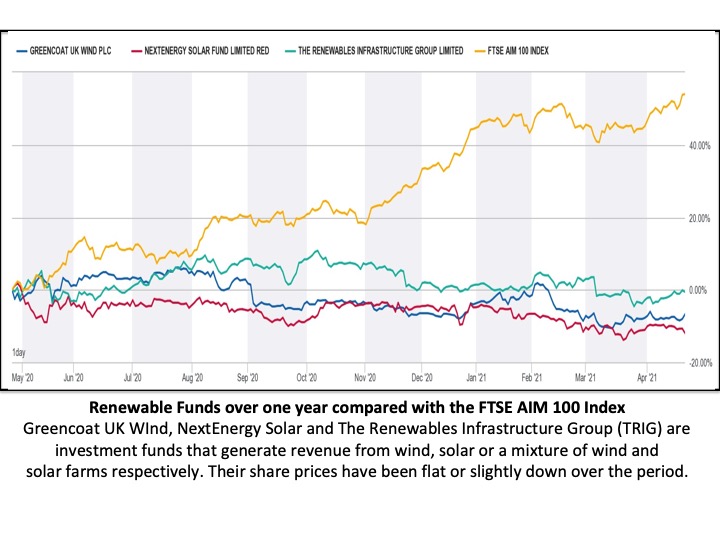 Finally the Funds, after recovering from the initial shock of the pandemic a year ago, have drifted slowly downwards. NextEnergySolar Fund has run below the others since mid-2018 and it has not caught up in this period. Its total return and net asset value per share are less than that of TRIG which is less than that of Greencoat UK Wind, possibly suggesting that wind farms are more profitable than solar farms.

The FTSE AIM 100 index, as also the FTSE AIM All-Share index, increased steadily in November and December. Thus some of the increases noted in individual shares may just have been reflecting the general trend. These are also unusual times with the effect of covid last year and the expected recovery this year. The main market shows a similar trend to AIM over the last six months but over one to five years has performed worse.

In general the listed small renewable stocks have continued to perform well. Unfortunately many small renewable companies with new technologies are privately financed. Hopefully these positive results will encourage more to list on the market.