How to develop a new storage system according to Donald Sadoway

Donald Sadoway is a professor of chemistry at MIT. He has been known for his animated lecturing style for a number of years, but more recently he has given several entertaining talks promoting electricity storage using liquid metal batteries[1]. These talks focus not so much on the technology but on how to develop new products.

As Sadoway says, grid storage needs to be “…big and cheap. If you need something to be dirt cheap then it should be made out of dirt, preferably local dirt.” He thinks that too many researchers look for the cleverest chemistry and then hope to drive down the cost through sheer volume (a dig at the use of lithium-ion). 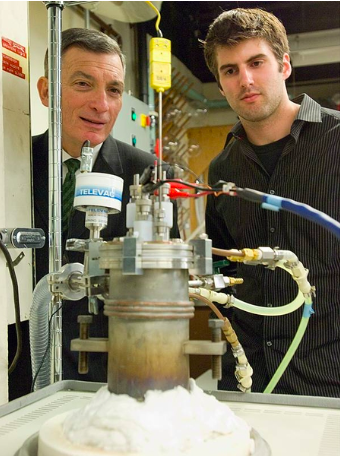 This is easier said than done. Professor Sadoway’s inspiration was an aluminium plant in which large electrolyser cells operating near 1000oC are placed in parallel rows each 15 metres long extending over 800 metres. The key to this technique was the discovery in 1886 that aluminium could be produced commercially using molten metals as electrodes and molten salt as the electrolyte. This liquid combination allows high electrical currents to be passed and increases efficiency. The process reduced dramatically the cost of aluminium and made it commercially attractive. However, it consumes a large quantity of electricity, so is strongly affected by the cost of the latter.

To apply this approach to storage, Sadoway needed to find two elements that were abundant, but had a significant difference in density (so that the two liquid metals would separate out naturally) and both highly reactive. To examine different elements and test them he did not hire a team of veterans in battery chemistry but a mixture of undergraduates, graduate students and post-docs in various disciplines. They eventually chose calcium as the light metal and antimony as the heavy one with calcium chloride as the electrolyte. Calcium is certainly abundant, but antimony is not, with the highest reserves and production in China. However, it is cheap at about US$60 for a 10 centimetre cube.

In 2010 Sadoway and some of his team formed a company, Ambri, in order to commercialise the technique (Greenbarrel, October 2021). They have steadily increased the size of the storage pack, this year releasing a 1MWH system in a 10 ft shipping container.

The liquid metal technique has several advantages. When cold the battery is dead, and is therefore completely safe to ship. It is claimed to have good capacity retention with no chance of thermal runaway. On start-up, the components do need to be heated to high temperature (500oC), but then the heat released during charging and discharging is enough to keep the components molten, providing it is cycled reasonably often.

Professor Sadoway is keen to stress the unorthodox approach taken by him and his team. First, they were not afraid of the high temperature and confident this would not be a problem. Second, they considered many elements, because weight was not an issue for grid storage. Third, they looked to scale up as much by increasing the size of the cell as by simply duplicating small cells. Finally, they were a team with a wide range of backgrounds, not simply experienced electrochemists.

This, then, is Sadoway’s “blueprint for inventing inventors”.  It has been successful, but is it necessarily better than other ways? It has, after all, taken at least ten years to date. The pros and cons of the liquid metal battery and the blueprint will become clearer over the next year or two. Meanwhile, for financing, a more traditional approach has been used. Initially MIT provided seed funds, then some private funds, including Total Energie, chipped in. Now Bill Gates and Reliance Industries are among the supporters.

[1] For example his TED talk, https://www.youtube.com/watch?v=Sddb0Khx0yA, or his talk at Imperial College, https://www.imperial.ac.uk/energy-futures-lab/news/videos/the-liquid-metal-battery-innovation-in-stationary-electricity-storage/