Ammonia as the global fuel reserve

In a talk on 16 November 2021 that was part of the Oxford Energy series Mike Mason showed how ammonia could become the key fuel of the future.

His argument starts from the observation that enough solar energy reaches the earth’s surface to satisfy our needs but that too much of it arrives in the wrong places. The question is one of storage and transport. Several years ago it was thought that Europe’s energy could be supplied by giant solar farms in the Sahara desert. The electricity generated would be transported via several very large electrical cables.

It was soon realised, however, that apart from the technical challenges such cables would be very vulnerable to acts of terrorism and politics. We would need multiple sources of such energy so that should there be a problem in one place it can be easily compensated by supply from another place. Running huge cables around the world is not practical, so we need to find another form of energy transport.

Gas could be a solution but it needs to be transported in a pipeline. Infra-continental pipelines are technically possible but, as we are finding with Nordstream II, suffer from the same political problems as cables. Intercontinental cables are not practical with the result that methane is now liquified for transport.

As we have found with oil, a liquid is the best way to move large amounts of energy around the world. The question is which liquid. It needs to be sufficiently economic to produce, easy to store and also to have a sufficient energy density to make it economic to transport. Liquid hydrogen is a possibility, but it only becomes liquid at -253oC at atmospheric pressure which makes it difficult to produce, store and transport.

Mr Mason is a supporter of ammonia (NH3). He argues that it is already produced in large volumes for fertiliser and therefore its manufacture, storage and transport are well understood.  It is a flexible fuel, as it can be used to generate electricity in a fuel cell or else burnt (it has been used to power buses and will be used in ships from next year). At atmospheric pressure it liquifies at 33oC and freezes solid at -77 oC, and is therefore even easier to store and transport than liquefied natural gas.  The same ships that today bring the latter from Qatar to the UK could be used to bring ammonia instead.

However, there are questions over the safety of ammonia. At high concentrations it is flammable and toxic. It is lighter than air so will disperse naturally outdoors, but in confined situations care is needed. More tests are needed to identify and find solution for unsafe conditions. 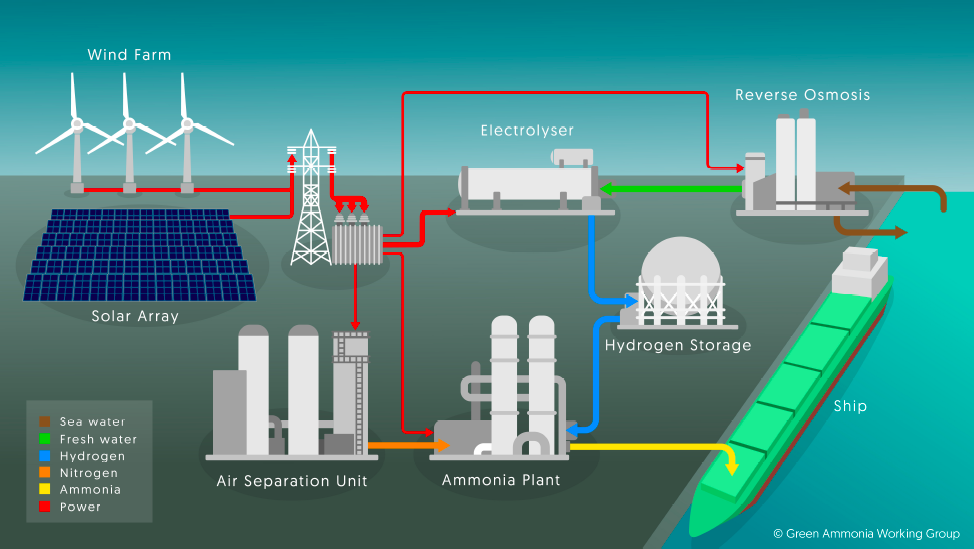 The steps in ammonia production, using water and renewable energy to produce hydrogen, which with nitrogen from the air produces ammonia (https://www.energy.ox.ac.uk/events/event/green-ammonia-a-potential-global-reserve-fuel-for-a-decarbonised-world/)

This brings us to the cost. There are many steps from the source of renewable energy to the production of ammonia, and then from ammonia back to useful energy. At each step some energy is lost (nearly fifty per cent in the electrolysis of water to hydrogen). Proponents argue that this is simply a matter of increasing the number of solar panels, and that these continue to decrease in cost. Much of the remaining equipment for producing and transporting ammonia already exists: we would simply need more of it. Mr Mason’s calculations show that if you produce it where it is cheapest to do so it can be competitive with natural gas and cheaper than gas with CCS.

In short, ammonia offers much of the flexibility of oil or natural gas but without the carbon. It is not seen as a primary source of renewable energy but as a backup. A worldwide ammonia market could be flexible enough to fill in when individual countries face extreme weather events or a seasonal drop in energy output. But such a market would need international backing to get going. Would investors put large sums into ammonia production in Western Australia, for example, without some guarantee that it would be used in Europe?