Last week on 9 September I published an article which said that recently the Financial Times had a lead story with a spokesman from Centrica the owner of British Gas saying soaring wholesale prices for energy, particularly gas, could raise domestic energy bills substantially They could also force energy intensive businesses to cut production and, in some cases shut down for a time.

I read through this story with a sinking sense of déjà vu of what it portended. Many times in the recent past have I heard and seen the way the beatings and warnings of a crisis have led  to an unseemly tussle between the government watchdog and a powerful cartel of energy suppliers on what the energy prices should be. Usually the result of the tussles has not served the consumers interest.

Earlier this year, I wrote a series of three articles on the background of how and why domestic energy supply in the UK has fallen into such a mess. Now the announcement has been made by Ofgem that the energy cap has been raised by 12 per cent I thought it might be useful to republish the pieces to help increase awareness of the problems. Below is the second article.

Towards the end of part one of our three article series on energy supply problems, I wrote that a recommendation had been made that customers should shop around and “switch” away from the leading energy companies to smaller, cheaper ones. This policy appeared to work for a while, in that towards the end of 2017 and into 2018, some 3m consumers switched to the 20 smaller supply companies that had sprung up to take advantage of a new opportunity. I said in the article, however, that there would be troubles ahead for the switchers and the switched. 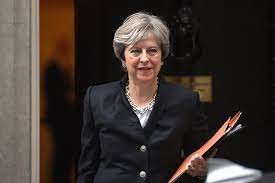 Mrs Theresa May when she was prime minister:photo Gov.UK

In the event, after the initial enthusiasm, the practice of switching suppliers ran into a perfect storm in 2018. According to Wikipedia: “A perfect storm means an unusual combination of events or things that concur to bring about an unsatisfactory or chaotic result”. In this case there were three inputs to the storm. First, there was political dithering, second, several would-be energy supply entrepreneurs that had sailed a bit too close to the wind in terms of legal documentation, and either collapsed or were shut down.

Third, several perfectly legitimate, conscientious small companies also went under. This was because the sweetheart deals they offered turned out not to be sweet enough. The political dithering referred to Prime Minister Mrs May’s procrastination in bringing in an energy cap. Such a cap seemed necessary, as soon as possible, to complement the switching. The Cap would get customers off the expensive standard variable tariff (SVT) and save them money.

Ofgem has said “please use an accredited price comparison website. Below is our list of companies that comply with our Code of Confidence”:

Yet Mrs May, who became prime minister in July 2016, waited until 18 March 2018 before starting the process of installing an energy cap. The first fully default price cap was announced in September 2018 and introduced on 1 January 2019 at a level of £1,137 a year. Customers on default tariffs (SVTs) expected to save an average of £76 a year thanks to the cap.

By this time there was a large army of energy professionals, would be entrepreneurs, investors and other colourful and not so colourful characters hoping to get in on some-kind-of-gold-rush. Some of the more colourful characters had dubious qualifications. One such chancer was identified by the Daily Mirror newspaper that had formed a liaison with one of the switching companies, Uswitch. In a large spread in its 9 January 2019 issue, the Mirror focused on a company called Economy Energy and its founding director Lubna Khilji. The Mirror showed a picture of a large, gated house with the caption saying: “Ms Khilji seems to have done nicely for herself—she bought a mansion for £964,000 in 2016”.

At the same time, the Mirror reported that Gareth Jones from South Wales spent months trying to get back from Ms Khilji the almost £290 he was owed — to no avail. Learning all this, Ofgem declared that the company’s performance was so bad that it was being banned from taking on new customers “on the basis that Economy Energy is unable to provide adequate customer service to its existing customers.” Following this statement Economy Energy, which had built up a customer base of 300,000 clients, ceased trading. It thus became the ninth of the smaller energy companies to collapse during 2018.

As for the third input to the storm, namely those that were perfectly legitimate and conscientious ran into a different set of problems to those of Economy Energy & Co. I will be writing about these problems in the third part of this series.

By Stewart Dalby|2021-09-16T16:58:12+00:00September 16th, 2021|Features|Comments Off on This is the second article in a three part series on domestic energy prices rising as leading suppliers are at odds with the regulator