IGas Energy’s story is one of a conventional UK oil and gas producer with potentially great value upside through its large unconventional shale holdings which have yet to be exploited.

We have not written about the company for some time — since April earlier this year, in fact. At that point we commented on the final results for 2017 which were released on 21 March 2018. The fact we have not reported on IGas’s activities since then is because there has not really been much to say; at least not much that would get shareholders pulses racing.

There were trading updates on 2 August 2018, 27 November 2018 and finally on 17 December 2018. They covered the unaudited results for the six months ended 30 June 2018 and also developments — particularly on the shale gas front — up to December. The conventional oil and gas division has been steady and the financials improved in first half of 2018 because of the good oil prices then prevailing.  The shale gas division though still seems to be making the progress you might expect from an arthritic snail.

The unaudited results for the six months ended 30 June 2018 said that net production averaged 2,300 barrels of oil equivalent (boepd) in H1 2018 (H1 2017:2,335 boepd). The company expected that production for the full year to be between 2,200 to 2,300 boepd. This made allowances for some asset sales and a recovery programme at the Stockbridge field.

On the income side what with various price hedges the average pre-hedge price realised was US$68.3 a barrel and post hedge average US$57.7 a barrel. This meant that group revenues were £21 million in the period excluding third party sales (H1 2017: £16.8m).  Adjusted EBITDA (earnings before interest, taxation, depreciation and amortisation was £6m (H1 2017 £2.5m). 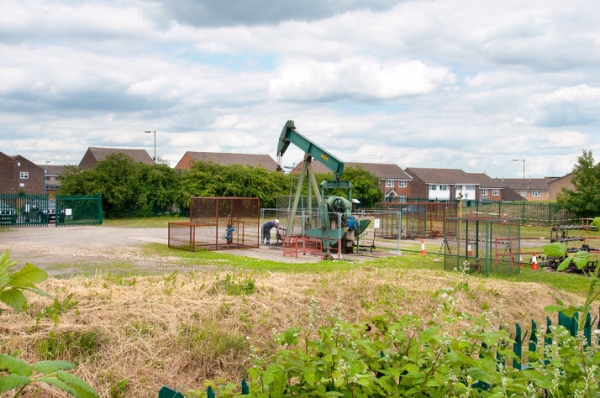 There was also a carried work programme of up to £182m. This is the war chest amassed largely to fund IGas’s putative shale gas offensive. The report for the first half 2018 devoted considerable space to IGas’s plans for its shale gas dreams.

A lot of the space was about Cuadrilla’s progress. This company was and is in the vanguard of the UK’s efforts to bring on a shale gas revolution. It was Cuadrilla that in 2011, probing for shale gas at the company’s Preston New Road site near Blackpool was said to have triggered a minor earthquake. This led to a de facto ban on horizontal drilling and fracture stimulation (fracking).

Seven years on, a persistent Cuadrilla was finally granted permission for two horizontal wells which would be fracked. This was in April 2018. The drill caused tremors and lots of protests. This led to suspensions of the drill and delays. However, on 17 July 2018, the company announced it had successfully completed the UK’s second horizontal shale gas well.

Both wells had positive, if not definitive results that suggested that boom time for investors in oil and gas explorers is just around the corner. Cuadrilla said in July there would be initial flow tests of both wells for six months. Cuadrilla is a private company and is not obliged to put out press releases left, right and centre. It is not surprising that the company seems to have gone into purdah.

There are few publicly quoted companies with extensive shale holdings in the UK and IGas is probably the most attractive for investors. The company holds around one million acres in several licences in the Midlands and the North of England, which could hold 80 trillion cubic feet (tcf) of shale gas in place. Given the demand for gas in British homes, industry and power is under 4tcf a year even with low recovery rates IGas could become a substantial supplier.

It is small wonder that IGas, therefore, has been keeping a beady eye on Cuadrilla’s developments and setbacks — as Igas’s progress has been a bit stop/go. The company has three projects on the go. The company had said earlier in 2018 that a shale gas well would be drilled in the third quarter but after some delays it came in at around 10 minutes to midnight, so to speak, very late in the fourth quarter.

IGas announced that following of the spudding of a well in North Nottinghamshire on 27 November 2018, it reached TD (total depth) of the TL-1 exploration well at the Tinker Lane site on 17 December 2018. This exploration well forms part of an integrated exploration and appraisal programme better to define the basin consisting of this margin-sited well at Tinker Lane and a basin-centred well at Springs Road, which is also in North Nottinghamshire.

The well encountered a shale interval before penetrating the key Dinantian limestone geophysical marker. The shales encountered did not include the primary target, the Bowland Shale. The Bowland shale is the vast basin which stretches across the north of England is believed to hold the largest reserves of shale gas, in the UK as opposed to shale oil.

Commenting on this Stephen Bowler, IGas CEO said: “Whilst results of this well will help calibrate our geological models of the region….. we are naturally disappointed not to have encountered the Bowland Shale.

“The outcome of this exploration well does not change our view of the prospectivity of our next target well at Springs Road, where we believe a thick section of shale is present due its more central location in basin and which we expect to spud in the first quarter of 2019.”

As for its third shale project IGas decided to launch an appeal against the local authority’s decision not to grant routine testing of a rock formation at the Ellsmere Port-1 existing well.

So, not exactly rapid progress on the shale gas exploitation front, it would seem. Last night the share price of the £109.67million market cap IGas was 89.40 pence against a 52-week high of 124.p and a low of 73p.