What is it about small renewable/alternative energy groups, quoted on London’s AIM, that focus on fuel cells-to-power? The fuel cell is said to have been invented in 1837 by Sir William Grove, yet almost 200 hundred years on some fuel cell groups still seem to be having a hard time reaching commercialisation–either because of constant hitches and delays in mastering the technology for the product(s) they want to sell or because they have directed the said product(s) towards inappropriate markets.

AIM group AFC has been developing alkaline fuel cells for several years and had said in 2015 that it would have a commercial version ready by the end of 2017.

In a quarterly newsletter released on 19 January 2018 AFC admitted that things were not going exactly to plan. Commenting on this in February 2018 we at Greenbarrel said: “Building a commercial case is not the same as being ready, so there has been some slippage. In fact, by the end of December 2017 AFC had the latest version of their fuel cell running at their offices in Dunsford Park in Surrey and at their pilot plant in Stade, Germany.

“This version included various improvements to reduce cost and extend the longevity, which were done in conjunction with the Italian company Industry de Nora, a global leader in electrochemistry and electrodes”. This version is also dependent on the integration and operation of AFC Energy fuel cell technology with hydrogen derived from a third-party ammonia cracker under the EU ALKAMONNIA programme. 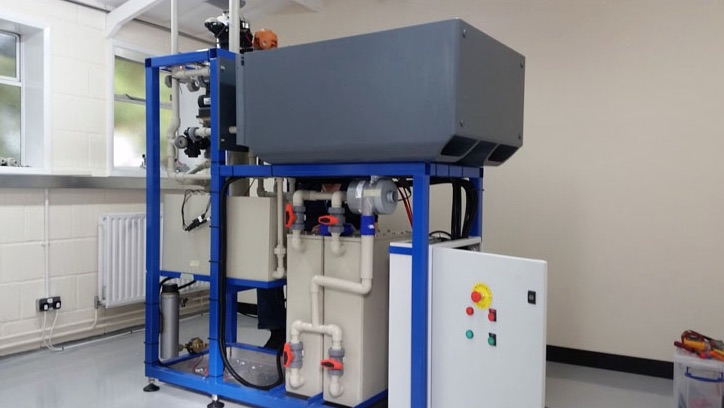 We continued in our comment: “No plan has yet been presented showing how this will be turned from a custom-built prototype to a production-line product. On the contrary AFC’s recent announcements have concentrated on yet further improvements to the fuel cells, suggesting that a final, commercial design is still some way off”. In other words, AFC seemed to have made snail-like progress and had become all but bogged down on the path towards commercialisation.

But the interim results for the half year ended 30 April 2018 announced on 16 July 2018 appear to belie this notion. These results made the key point that AFC’s main target is industrial plants which often yield, directly or by way of ammonia, hydrogen in huge quantities as a by-product.

It is significant that the leading item in the list of highlights in the interim report is that Southern Oil Pty, who will produce hydrogen from biomass, placed an order in July 2018 for the first AFC hydrogen power generation in Australia. A brief period of engineering has started to finalise project size, scope and commensurate terms.

But that is not all. A decision to proceed with the hydrogen initiative is expected sometime in 2018.It seems the site will have an on-site anaerobic digestion plant using food waste to produce hydrogen for the fuel cells.

Also, a successful renegotiation and extension of the commercial hydrogen supply agreement was struck with Air Products in Stade. Air Products is a large US industrial gas company, who get their hydrogen from Dow Chemical.

Apart from Stade, Dunsford Park and Southern Oil, AFC has memoranda of understanding since 2015 with industrial organisations in Dubai, Thailand and South Korea

AFC has lived entirely off EU project grants and funds raised on the market. The interim results ended 30 April 2018 said: “In the period, the company realised minimal grant income”. It was £387,000. This included £200,000 for the ALKAMMONIA programme. Another large EU project, the POWER-UP scheme, which was designed to prove the manufacturability of alkaline fuel cells and led to the plant in Germany, finished in June 2018.

The cash balance as 30 June 2018 was £4million. But with operating losses coming in at £2m for the period and with annual pre-tax losses averaging £6m a year, AFC will need to raise funds some-time this year. All in all, though, AFC does seem to have made significant progress in the past year.

Commenting on the six months results AFC’s CEO Adam Bond said: “Whilst the final basis of design of the fuel cell has taken longer that we had hoped………. I am most excited about the growing success in system integration we are seeing which will allow us to target new markets for the fuel cell which will see AFC Energy as a leading exponents of the rapidly emerging hydrogen economy, both in the UK and internationally”.