Rurelec has continuing problems in South America with its power plants

According to its own rather tired-looking website, Rurelec’s basic strategy has been to acquire, develop and manage small to medium-sized power plants in South America.  The company, which is registered in England and Wales initially prospered and floated on London’s AIM in 2004, with an interest in a functioning plant in Argentina and some exciting development opportunities in Chile, Peru and Bolivia.

But Rurelec ran into the political instability and economic volatility besetting South America at the time. On 1 May 2010 the Bolivian Government nationalised Rurelec’s 50.01 per cent-owned power plant, Guaracachi, which was then the largest electricity generator in the country. The company duly filed a claim for compensation.

The eventual, long-delayed, 2014 arbitration award fell well short of Rurelec’s claim for US$142.3 million. The resulting mark downs forced Rurelec to rely on high-interest, short term loans and became short of cash for funding other projects.

The company survived this series of non-fatal blows and we picked up on Rurelec’s story when Greenbarrel.org, the predecessor website to Greenbarrel.com, published an article on 26 January 2017. This drew heavily on the interim results report for the six months ending 30 June 2016.

The report showed a scaling down of its activities, but the company still had assets in Chile, Peru and Argentina. It was thanks to the fact that at this point the plant in Argentina was fully operational that the company was able to register a post- tax profit of £2million for the six-month period. 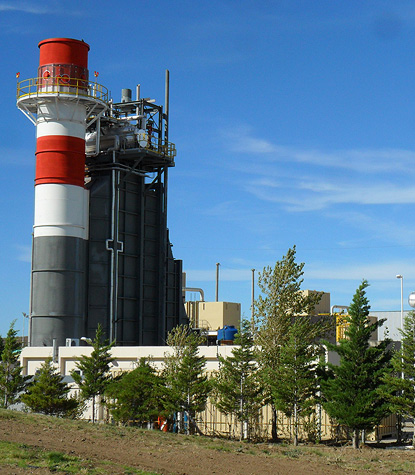 Rurelec has a functioning power plant in Patagonia in Argentina

So, what is now the situation some 19 months on? The interim results for the six months ending on 30 June 2017 were published on 29 September 2017 and, rather usefully, they also contained some post period developments. All in all they do not make for cheerful reading for shareholders.

Rurelec said that in Peru what remained of the portfolio of potentially 300MV worth of projects after divestments, was up for sale. In Chile there had been a similar assembly of assets. There remains a live project in the form of the 250MW open cycle gas fired peaking plant known as Central Illapa. Rurelec wants to develop this, possibly through a joint venture (JV).

Neither  Chile or Peru, though, contributes any revenue to Rurelec, so the focus is very much on Argentina where the company has a functioning operation. Rurelec owns a 50 per cent interest in Energia del Sur S.A (EdS), whose parent company Patagonia Energy Ltd is owner and operator of a 136 MW combined cycle gas turbine (CCGT) facility in Patagonia, where there traditionally have been power shortages.

The report for the first half of 2017 said there was a post-tax loss of £1.9m. This was primarily because of foreign exchange losses of £1m due to loans to the Argentine operations. But it also said that in August and September there were two significant production outages. They did not quantify how serious they were at the time. But they did say the company was working well. There were debts but the outages did not prevent the operating entity from remitting loan repayments of £2m to the UK.

Here the plot starts to thicken. On 11 October 11 2017 a former CEO of Rurelec Peter Earl set up the Earl Consortium and said it would start talks possibly to take over Rurelec. This gave the shares a boost of around 13 per cent on the day. Quickly after this Rurelec became a bit more explicit about the outages. It said Energia del Sur had completed a temporary modification of one steam turbine ahead of the planned repairs next year.

The steam turbine, Rurelec said, will run at approximately 21MW instead of the normal 43MW and the power plant would have maximum output of 97MW until repairs, which would not happen before May 2018. This would mean Rurelec will receive minimal payments until the plant is restored. This news resulted in a sharp drop in the share price by 18 per cent to 1.52p. On 7 November 2017 the Earl Consortium announced that because of an anticipated “material loss of income” the offer talks were being terminated.

And that is roughly where we are at the moment.  The company in a review said: “The strategy of the group continues to be focusAed on stabilising the financial position, keeping costs under control, whilst certain assets are sold.” This is not exactly Gung Ho talk.

The shares having been 2.20p in the past twelve months are now bumping along at around 1p with little sign of life. Perhaps the one beacon of light in the whole scenario, is that if Rurelec’s own figures are to be believed, the shares have a NAV of 5p each. Given that there are 561.39m shares in issue this suggests the company could be valued at £28m based on the properties it holds. This is an awful lot more than the company’s current market cap of  £6.36m