Ocean Power Technologies report on the first half year of fiscal 2018 fails to shine.

Just over a year ago we wrote about the financial  results for the first half of fiscal 2017 for  Ocean Power Technologies(OPT), the American wave energy company which started commercial operations in 1994. On 12 December 2016 we reported that for the six months ending on 31 October 2016 revenue was down, the net loss was up, There was an increase in total cash because of a public stock offering.

Commenting on these figures we said they were not unexpected. They continued a steady, existing, trend. NASDAQ-listed OPT has historically funded its operations principally through public and private sales of its equity. It had never made a profit and the accumulated deficit as of 31 Oct 2016 was some US$ 181.6 m. (against OPT’s market cap of US$18.6m on the basis of the day’s share price of US$ 3.60).

Almost exactly 12 months on we had (on 12 December 2017) the results for the first half of the fiscal 2018 which ended on 31 October 2017. So, has anything changed? Well, not really. The steady downward trend in the financials has continued. If anything has altered it is that with each successive update, the information provided seems to get sparser.

We have written copiously on how difficult it can be for young renewable or alternative energy companies to quickly commercialise because start-up capital often can be exhausted by the need to prove a group’s technologies and jump over regulatory hurdles before revenue streams are achieved. 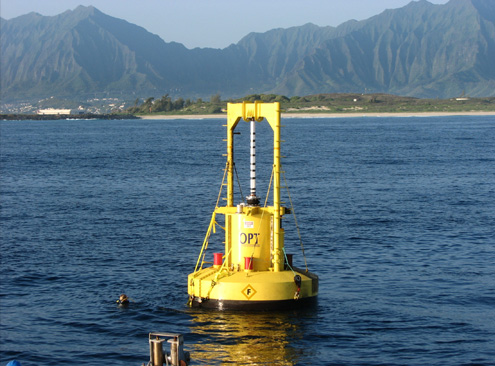 But these figures from OPT seem to confirm it can be exceptionally problematic for wave energy companies to make a profit. OPT was first quoted on AIM in 2003 before it obtained its NASDAQ listing. From about 2002, government agencies accounted for a significant portion of the company’s revenues. OPT was awarded grants from the US Navy, the US Dept. of the Environment, the UK and the EU, to develop buoys capable of supplying to the grid. So the company duly tried to get this concept to work in the US, in Oregon, off the Spanish coast, and in Australia. Success eluded them.

At the same time, there was also growing support to switch from grid-connected buoys to the company’s work on autonomous buoys capable of providing non-grid power in remote, off-shore, locations. This seemed ideal for the company’s current flagship product the Powerbuoy 3 (PB3). This is a floating system anchored to the sea floor down to 3000 metres. The float moves vertically up and down on a spar in response to wave motion. The movement is connected mechanically so as to drive an electric generator. This generator is designed to power isolated equipment in the oil and gas, defence and security ocean observation and communication sectors.

Commercialising the PB3 is now the focus of the company’s activities. To this end OPT signed a series of agreements with Mitsui Engineering & Shipbuilding Co. Ltd to develop the buoys for Japanese waters. (This was at a time when the Japanese Government was seeking to greatly increase the quantity of electricity generated by renewables in the wake of the Fukushima nuclear disaster in March 2011.)

The operations review in last December’s update had a lot to say about increasing sales and improving financial performance but little on the Japanese deal. It said: “The original six-month lease with Mitsui Engineering & Shipbuilding for a PB3 Powerbuoy that was successfully deployed off the coast of Japan was extended for an additional month which ended in September. The Powerbuoy has arrived back in the company’s NJ headquarters where it will be refurbished and prepared for possible redeployment,”

All that one can conclude from all this is that OPT continues to achieve significant technological progress, but more evident commercial success is what is really needed. The US$22.1m market cap company’s share price was most recently US$1.2 against a 52-week high of US$3.7 and a low of US$1.