In May 2016 in Green & Smart, the Malaysian waste- to- biogas company sailed comfortably into a Listing on London’s AIM having first consolidated various subsidiaries and minority holdings into Green & Smart Holdings and then raising £3.3million (net of costs) through an initial Public Offering (IPO).  Now, eighteen months on, its interim results for the six months ending March 31 2017, released on June 20 2017, show that although the company became becalmed during the period, suffering a fall in pre-tax profits (PBT) in the period, it looks set fair to become a leading player in Malaysia’s waste-to-energy industry with an outlook of good profits growth in the year ending September 2018.

Green & Smart started out as a company involved in waste water treatment in rubber plantations. Today its core activity is capturing biogas from Palm Oil Mill Effluent (POME). Energy from POME is very big business in Malaysia just now and could grow exponentially. The company has 33.3 per cent of the 112.5MW of Feed-in Tariff approved capacity coming on stream between 2015 and 2017, the largest industry share, and Malaysia is targeting at least a further 112.2MW by 2020, Power from G & S’s POME Plants will  covered by G & S’s 16 year FiT contract and sold to Malaysia’s national grids.

G & S’s pre- AIM flotation reorganisation means not only will it have its own core POME business it has also invested in two other Malaysian green companies involved in waste management—Megagreen Energy (MGE), where there is a 15 per cent stake and Concord Green Energy (CGE), in which G & S has 25 per cent of the action. The group will operate two business models for these energy plants, build own and operate (BOO), and engineering, procurement, construction and commissioning (EPCC.) 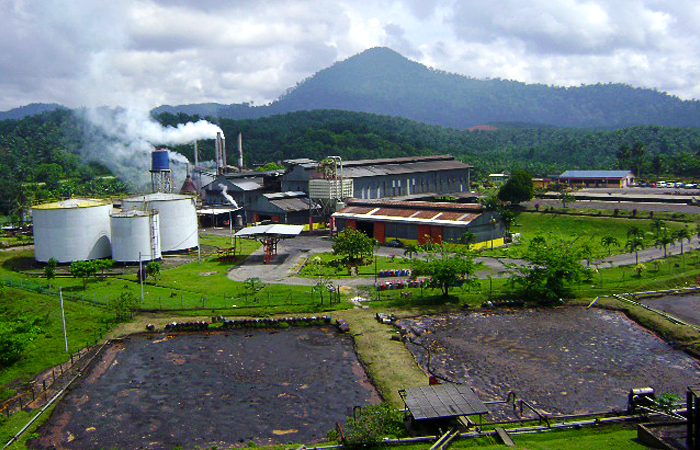 Historically, G &S has operated as an EPCC company designing and building projects for other owners including palm oil mill owners. This has meant good relationships with major mill owners in the country. But it also means G & S could face a lumpy and uncertain earnings stream. While EPCC projects will  contribute to up front earnings, once completed the only long term earnings stream is under the 16-year long term operations and maintenance (O & M) on contracts for each project. This helps but does not remove the lumpiness of the earnings pattern.

House broker Cantor Fitzgerald commenting on the interim results for the six months ending to March 31, 2017, which were released on June 22, 2017 said that revenue was 18 per cent to RM 25.8 million (£4.6m), gross profits were 3 per cent to the good at RM6.9m (£1.2m).   ) but profits before tax (PBT) fell 21 per cent to RMs3.8m. Cantor Fitzgerald intimated that although G & S has outstanding receivables of RM76m related to MGE and CGE these monies probably will be paid in financial year 2017-2018. This is the reason for the poor PBT performance.

Alternatively, if G & S develops projects under a BOO model, there is no immediate income until such time as projects are completed and generating cash flows. These cash flows can be considerable. Previous house broker SP Angel says the margins on these plants is high – biogas power generation plants at a mill are typically 2MW in size and cost RM14m(£2.6m) to build with construction and connection to the national grid taking just under 12 months.  The brokers model is a 2MW plant producing annual electricity sales of RM7.3m (£1.3m) should generate a net profit of RM3.5m (£0.6m)—this is a 47 per cent margin. Cantor Fitzgerald says the payback period is just over 3 years.

G & S has decided to combine these two models to create earnings and a sustainable earnings stream. Starting with its existing EPCC business with MGE and CGE two plants have already been built and three new ones are being commissioned.  G&S is making progress with its own BOO schemes. The 2MW Kahang plant was commissioned earlier this year and has ramped up to full production. The 2M Malpon plant is also thought to be close to being fully operational. There are four other plants in the pipeline.

All this should quickly feed through to the financials. Cantor Fitzgerald has said for the year ending 2017 estimated results should be revenue of RM 51.2m and PBT of RM 7m. In the year ending September 2018 these are expected to rise to RM57.8m in revenue but RM16.9m in PBT. This reflects much better margins. The broker has set a target price of 12.5 pence. The shares closed last Friday evening at  7.63p.