Masdar City: the world’s most sustainable?

Greenbarrel.org took advantage of a holiday in the United Arab Emirates to visit Masdar City, Abu Dhabi’s test bed for a sustainable eco-city, whose long-term goal is to “…transform Abu Dhabi’s economy from an oil foundation to one with a knowledge and innovation base.”

The goal is ambitious and so is the term “city”. In 2008 Masdar acquired 2.3 square miles of semi-desert next to the airport in a region allotted for development. So far an area of only 300 yards square has been built on, mainly for the Masdar Institute, a graduate college established with the support of MIT and devoted to clean energy and climate change.

The area does indeed have some of the feel of a university campus, with residential blocks as well as offices and laboratories, but also a few basic shops, cafes and restaurants, and some other businesses. Siemens, for example, have a building with their Middle East headquarters.

There is a striking contrast with the gleaming 50-storey towers that make up so much of Abu Dhabi. In Masdar, the sun is the enemy, not only because of the energy needed to keep buildings cool but also because it limits interaction between buildings.

Thus, the streets have no vehicles and are narrow and oriented so that they are shaded much of the day. There is a basement under the entire area that is accessible to vehicles, but these are mainly driverless electric pods that go from the basement car park to a central point. (The pods were designed by MIT using technology that relies on sensors and magnets in the floor. One suspects that they are only used by visitors. It is probably quicker to walk, but less fun).

The buildings themselves have a variety of styles, but all are well insulated, often with special materials and using ancient Arabic architectural techniques to reduce the solar gain. For example windows are small and set back into the walls to increase shading; balconies have brick screens. Residential units are built around small atriums with much attention paid to air circulation both day and night. 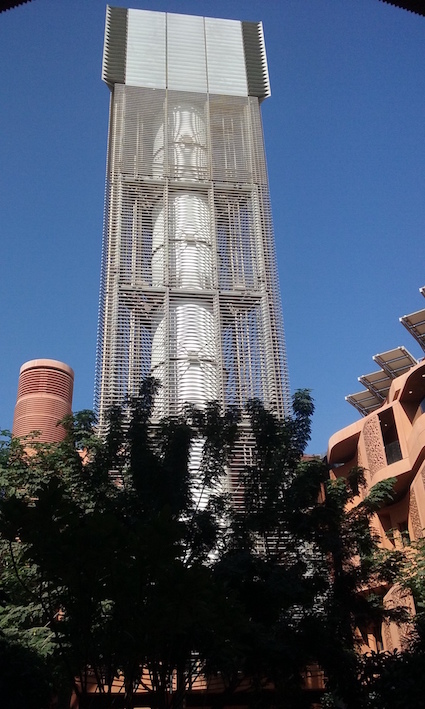 The 150 ft wind tower captures cooler, higher-level winds and brings them down to street level. Depending on humidity, mist is added to the air in the tower.

The 150 ft wind tower captures cooler, higher-level winds and brings them down to street level. Depending on humidity, mist is added to the air in the tower.

On a December day with temperatures in the mid twenties (Centigrade) it was not possible to judge how effective these measures would be in mid-summer. Air-conditioning is still needed, and was even in use in the indoor basketball court.

Masdar has a large solar array as well as roof panels. These provide 19,000 MWh per year, which would make Masdar self-sufficient if it had an energy storage facility to cover use at night or in sandstorms. (Average annual energy consumption per person in the UAE is 15 MWh, so the panels might support 1266 people, but there are much fewer living or working in Masdar. In fact it is connected to the Abu Dhabi grid.)

Elsewhere on the site there are various projects in progress or recently completed. A 500-unit residential complex is under construction; a 7-storey office complex houses the International Renewable Energy Agency. These and other planned buildings have more conventional designs than the Institute, but still have high Leadership in Energy and Environmental Design (LEED) certification and claim to reduce energy and water needs by large amounts. There are no plans to increase the solar array or to add other renewable sources.

Masdar is one of the companies funded by Mubadala, the Abu Dhabi sovereign wealth fund. In addition to the City and the Institute Masdar has a Clean Energy division that invests in projects around the world, most notably the London wind array and the 100 MW Shams solar concentrator in west Abu Dhabi.

In the harsh physical environment of Abu Dhabi it would be easy to rely on the abundant oil and gas to provide power and de-salinate water, so it is encouraging to see research into and use of methods to reduce energy needs. Whether this relatively small development leads to the hoped-for transformation of the country seems much more doubtful.