AFC Energy, the developer of alkaline fuel cells, is moving steadily from laboratory prototype to commercial introduction. Of the several different types of fuel cell, alkaline cells are best known for their use in space missions of the 60’s. However they were not developed commercially because of the expensive catalysts needed, and because the cells did not last long enough, especially with impurities in the hydrogen or oxygen inputs.

AFC took up the challenge in 2006. Progress has been slow but steady. By 2013 they could announce that they had made a fuel cell with 12 month longevity in lab testing – up from 3 months the previous year. By 2015 they had built the prototype 240 kilowatt KORE unit at their plant in Stade, Germany and had begun selling electricity to the German grid. 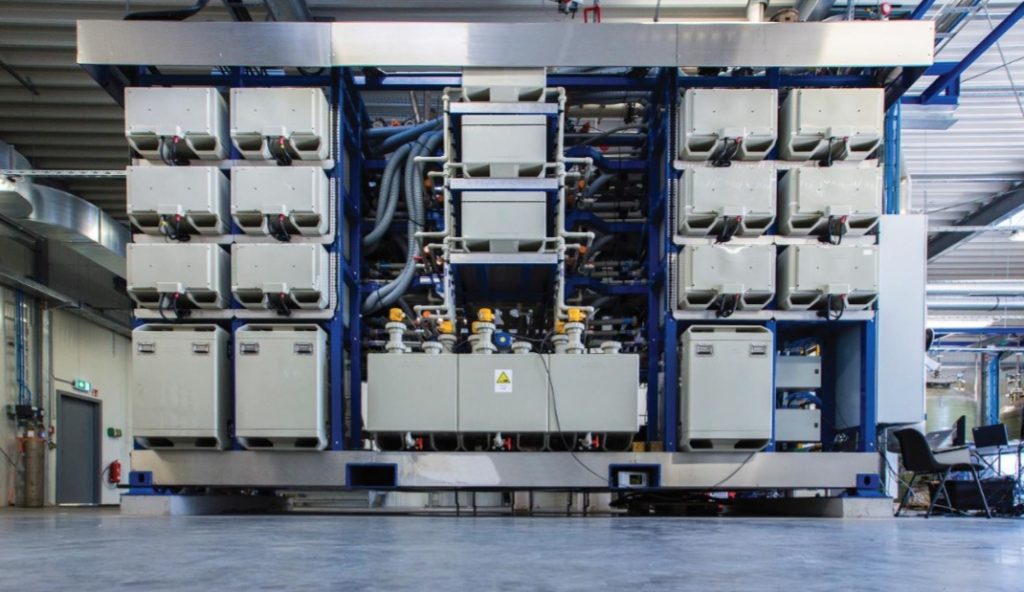 The KORE system produces a nominal 240 kW of electricity from 24 cartridges, 6 of which can be seen top left and 6 top right in the picture. Each cartridge consists of 101 individual fuel cells. The remaining equipment handles the hydrogen, air and potassium hydroxide electrolyte as well as safety and electrical systems. Actual output was tested at 204kW.

KORE is part of the PowerUp programme, which is a consortium led by AFC to prove the manufacturability of alkaline fuel cells. It runs from April 2013 to June 2017 and is funded by the EU up to €11.5 million as part of its Fuel Cells and Hydrogen initiative. Of this AFC will receive £4.9m if the goals are met.

Results suggest that AFC and their partners can indeed manufacture substantial fuel cell systems, but how close are they to a commercial product? It seems that improvements are needed. On 14 November the company announced the completion of a second generation unit with a range of improvements including the ability to handle less pure hydrogen, and the ability to recover quickly while being cycled on and off. The first reduces cost and expands the market while the second is essential in a commercial environment.

This unit has run continuously for 1 month, but much longer testing will be needed. Longevity and availability are key issues for their market of industrial power units (as well as efficiency and cost). Of particular interest are chemical industries that produce hydrogen as a by-product.

Since early 2015 the company has memoranda of understanding with industrial organisations in Dubai, Thailand and South Korea, all waiting, presumably, for the product to become sufficiently mature to try in a commercial environment. Quite a risk unless you are a large organisation with plenty of backup power. Someone just needs to bite the bullet.

Meanwhile AFC continue to strengthen their leadership team and to build partnerships to improve the product. The latest addition, in August, was the Italian Industrie De Nora, a global leader in electrochemistry and electrodes.

As we noted in March, investors seem to believe in the company. The current share price is 21p with 12 month high and low of 36.5p and 10.5p. Market capitalisation is £67m.