At the end of June, the Climate Change Committee (CCC) submitted to Parliament its annual progress report on the reduction of carbon emissions, as it has done every year since 2009. Although it is doubtful if many members of parliament have read all 618 pages of the report, they would have found plenty to think about, even in the Executive Summary.

In the foreword, Lord Debden, chairman of the Committee and ex Secretary of State for the Environment from 1993-97, sums up the Committee’s conclusions as follows “In targets, the UK is indeed a world leader. However, this Progress Report reveals that, despite important achievements in renewable energy and electric vehicles, the government is failing in much of its implementation”.

The report starts by examining carbon emissions in 2020 and 2021 (see chart below). These were, of course, strongly affected by the covid pandemic and not a good guide to future trends. However, if the trend over the last ten years is maintained the goals would be easily achievable, except that the easiest parts have already been done. Thanks partly to hosting COP-26 in Glasgow, the same period saw a blossoming of targets, including the 2050 Net Zero target, the 2033-37 Sixth Carbon Budget, the 2030 National Determined Contribution (reducing territorial emissions by 68 per cent from 1990 levels), and the Net Zero Strategy to achieve all this. 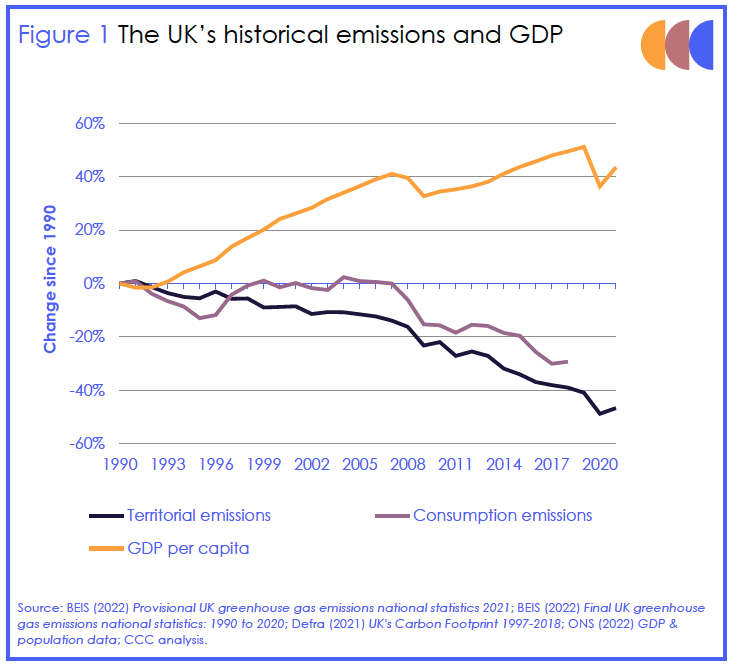 The committee goes on to look at progress and assess plans in five key areas: surface transport, electricity supply, buildings, manufacturing/construction, and agriculture/land use.  The results are summarised in the chart below, with the colour indicating the CCC’s opinion of the government plans. Aviation and shipping are treated separately. 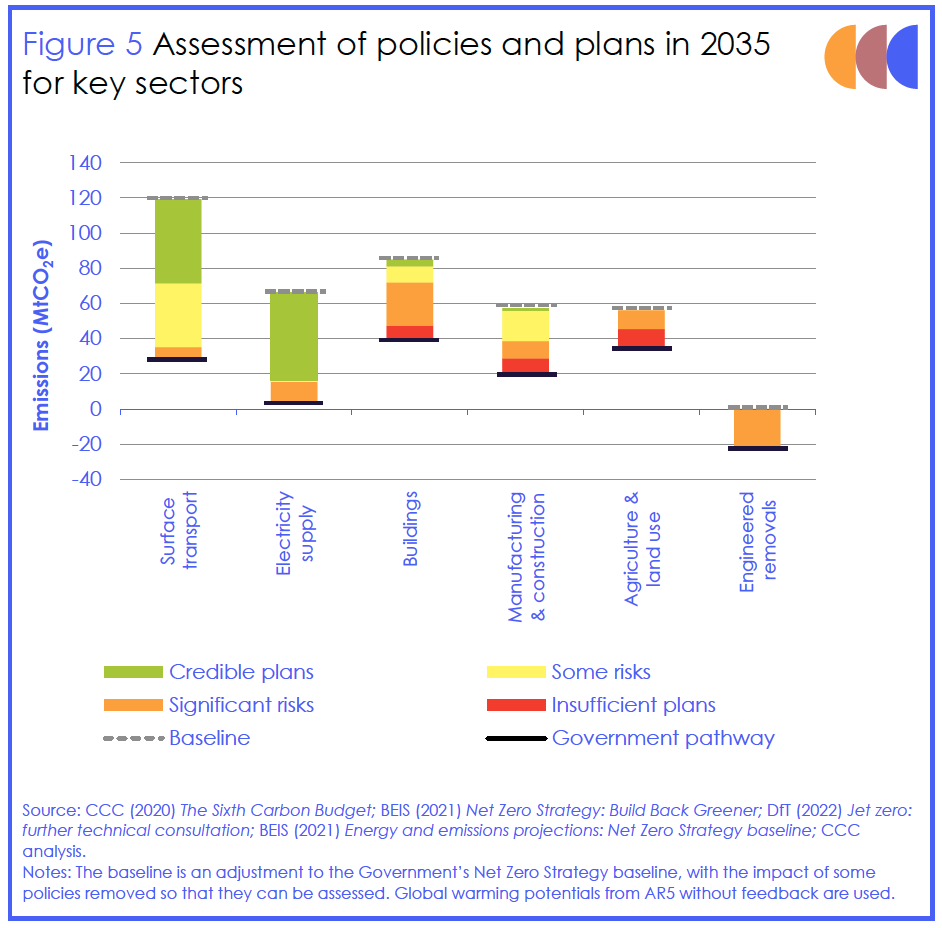 Each column compares the emissions in 2035 projected from those in 1990 without any carbon reduction (the baselines in grey) with the government plans for each sector (the black lines). The colours indicate the CCC’s opinion on the plans from credible (green) to insufficient (red).

As can be seen the CCC is generally happy with the plans for electricity supply and for surface transport. Somewhat surprisingly the committee thinks the sales of electric cars are going well. This is because although as a proportion of all new cars they are small, that proportion is increasing faster than the committee had predicted. The same is not true for the sales of electric vans and for charging infrastructure.

The main problems lie with buildings, manufacturing and agriculture. For buildings the CCC believes that the rates of improvement in energy efficiency are well below the necessary level, while it doubts that the infrastructure and personnel will be in place to install the number of heat pumps required. We are apparently still building new homes that do not meet the minimum standards of efficiency. For manufacturing and industry the committee complains that there is not enough reliable data to monitor whether policies are being implemented, particularly for small entities, and that policies are missing on energy efficiency and other matters.

In agriculture and land use little progress has been made on low carbon farming and productivity measures, while tree planting is below target and issues such as emissions from degraded peatlands have not been addressed. The only bright spot is reduced meat consumption but it seems this has happened without any noticeable government action.

Engineered removals (i.e. direct capture of CO2 from the atmosphere) is considered a significant risk because the technologies are new and unproven.

In general, the CCC feels that the plans rely too much on unproven technologies, while the actions being taken are nearly all on the supply side with too little being done to stimulate people and organisations to reduce demand. The lack of cross-cutting enablers – initiatives that cut across departments and levels of government – is also criticised. For example, bottlenecks caused by skill gaps and lack of planning consent need to be addressed; the Treasury still has not set out how the costs and benefits of the transition will be shared fairly.

The report is filled with useful information and suggestions in all aspects of climate change, and some beyond it, such as suggestions to address the energy crisis and the rising cost of living. There are 100 pages of recommendations for 20 government departments and administrative units. Sometimes it feels as though the CCC is trying to run all the internal affairs of the country. In the current somnolent state of the government and with the issues of climate change unmentioned during the current Conservative party leadership campaign some might say why not.