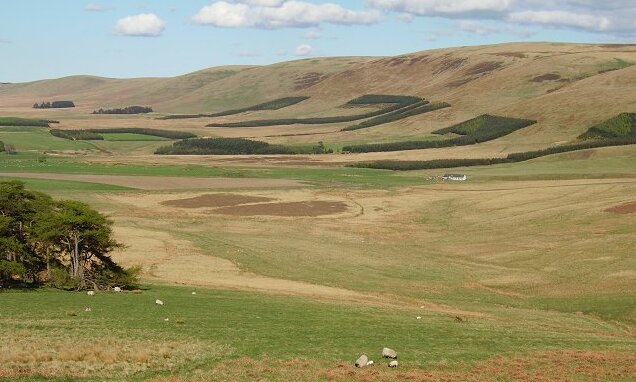 The UK’s upland peat moors should be re-wetted urgently, the CCC says, to stop them drying out and releasing their carbon. Image: By Richard Webb / Peat Law Burn, via Wikimedia Commons

Britain, host of November’s UN talks, COP-b26, is pilloried by its own advisers for the UK’s “really shocking” climate record.

In a searing indictment of its failure to act fast enough to prepare for the onslaught of rising heat, there is condemnation of the British government by its independent advisers for the UK’s “really shocking” climate record.

The latest science says the world could warm by an average of 4°C over historic levels by 2100, an increase which would prove devastating to human life and the natural world.

The advisers’ assessment says the UK’s plans are inadequate to cope even with a 2°C temperature rise, a risky limit which exceeds the 1.5°C maximum most of the world’s nations agreed to aim for as the maximum tolerable rise in the Paris Agreement of 2015.

The report is the work of the Climate Change Committee (CCC), an independent statutory body set up to advise the UK government and the devolved administrations of Scotland, Wales and Northern Ireland, on emissions targets, and to report to Parliament on progress made in cutting greenhouse gas emissions and adapting to the impacts of climate change.

The CCC’s chief executive, Chris Stark, said CCC members were so frustrated with the lack of progress on climate-proofing the UK that they deliberately made this report “spiky”. He said: “It’s really troubling how little attention the government has paid to this.

“Overall, the level of risk that we are facing from climate change has increased since five years ago. Our preparations are not keeping pace with the risks that we face. That is a very concerning conclusion.”

Dr Stark told BBC News: “The extent of planning for many of the risks is really shocking. We are not thinking clearly about what lies ahead.”

The CCC’s assessment examines risks and opportunities affecting every aspect of life in the UK. It concludes that action to improve the nation’s resilience is failing to keep pace with the impacts of a hotter planet and the growing climate risks the UK faces.

The UK is already committed to a legally-binding goal of cutting its greenhouse gas emissions to net zero by the middle of the century. This  CCC assessment focuses, not on mitigation − emissions cuts − but on adaptation − preparing to live with the inevitable. The government’s failure to act on adaptation is putting its net zero goal in jeopardy, the New Scientist reports.

Since the CCC’s last assessment five years ago, more than 570,000 new homes have been built in the UK that are not resilient to future high temperatures; since 2018 over 4,000 heat-related deaths have been recorded in England alone.

Baroness Brown, chair of the CCC’s adaptation committee, said: “Adaptation remains the Cinderella of climate change, still sitting in rags by the stove: under-resourced, underfunded and often ignored. A detailed, effective action plan that prepares the UK for climate change is now essential and needed urgently.”

UK-wide, nearly 60% of the risks and opportunities assessed in the 1500-page report have been given the highest urgency score. Among the priority risk areas identified by the CCC as needing immediate attention, within the next two years at the most, are:

The changing climate will create some opportunities for the UK, the CCC acknowledges, but these are massively outweighed by the risks.

It says the government must deliver a much better action plan to support good adaptation planning across the UK and integrate this into all relevant government plans and policies. The government has to date not heeded the CCC’s advice on the importance of this plan or on funding it adequately, and this needs to change, the Committee says.

In response, a government spokesman commented: “We welcome this report and will consider its recommendations closely as we continue to demonstrate global leadership on climate change ahead of COP-26 [the UN climate summit to be hosted by the UK] in November.” − Climate News Network

About Alex Kirby: Alex Kirby is a former BBC journalist and environment correspondent. He now works with universities, charities and international agencies to improve their media skills, and with journalists in the developing world keen to specialise in environmental reporting